Ditch the due date! Let’s start talking about the due month: or even 6 weeks

This was the message that Sara Wickham asked us to share after her talk:  “10 things I wish women knew about induction” held at the Watershed in Bristol last night.

Let’s stop asking women about their due date and,  instead, ask about the month in which their baby is due,  or even, as I talked afterwards with lovely Devon independent midwife Julia Duthie, maybe we should even extend that to 6 weeks.  Julia and I couldn’t work out a phrase to include “when are your due 6 weeks?”.  We liked the image of half a dozen eggs!  Maybe you have some ideas.

We must keep reminding everyone we work with that the length of a normal pregnancy can vary from 37 weeks to 43 weeks.

I am always “correcting” my students work when they say that their client had their baby “early” (ie before 40 weeks) or “late” ie after 40 weeks. Indeed, I just reviewed my pregnancy client intake form and I have the dreaded words “due date”. You will be pleased to know I have now replaced them with “due month”!  Even though I focus on a month being the window on the end of pregnancy, the mere fact of getting them to write a due date transmits this idea of being early or late.

Why is it so important not to be fixed on a date?

Well, the topic of  Sara’s talk was induction: and in many cases induction is offered for so called “post term” pregnancy: and term is often defined as 40 weeks.

I regularly have clients coming to me for shiatsu or massage because they are “overdue” and being booked in for induction when they are approaching 40 weeks. They want to do something to bring their labour on so that they can avoid being induced. I see my work is primarily to support them to connect with their body and what is going on for them emotionally and physically and not to be fixed on a date. I may include work with points on the Extraordinary vessels (like the Girdle vessel) which are supporting the body’s natural hormonal production (amongst many other things). I also include work to support them to connect with their baby and find out how the baby is doing. It does not include pressing so called “natural induction” points to make them go into labour! I may include some of these points if they feel relevant for the client as they can support the process of birth, which takes as long as it takes and happens when both mother and baby are ready. 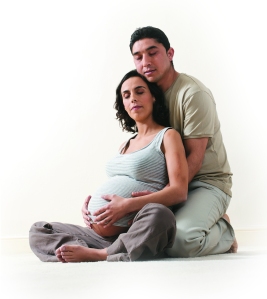 I feel it is important that I work with a sense of trust of the mother and baby’s process, and indeed the father’s too: it is a family we are working with. I know from my experience that if women are relaxed and not worried about being induced or their birth, they will go into labour when they are ready, but also, as importantly when their baby is ready! I have worked with many adults who experienced induced labours as the baby,  and it definitely has an effect on their energy. Imagine how you would feel: you are happily caressed in the warm waters of the amniotic fluid, protected and loved by your mother (we hope.. sadly it is not always the case)  sensing that there is a world outside the womb, preparing for your journey of birth, when all of a sudden the womb abruptly contracts around you and you are being forced out before you are ready. There is increasing awareness of the effect of our birth on the rest of our life. I referred to the pioneering work of William Emerson in another blog on the Extraordinary vessels .

Yes, sadly sometimes things go “wrong” . Babies become ill or die, but, in my experience, mothers, if they are supported to go within, will sense that too. They are the best judges of what is going on for them and for their baby.

Of course, I can’t make their decision for them about whether or not to agree with induction: but I can support them to access good information to make that choice. Sara’s book ” Inducing labour: making informed decisions” is a wonderful resource. AIMS (Association for the Improvement in Maternity service)s who published the book is a wonderful organisation. They are a fantastic resource for parents and health care professionals who recognise that birth is a normal not a medical event. If your clients need more information about particular issues, they have a helpline: helpline@aims.org.uk. AIMS is a voluntary organisation, so it is great if you can join it and support their wonderful work.

The least risk is 40 weeks but after that it is 39 weeks and then 41 weeks: and at 43 weeks the risk is almost identical as 37 weeks! So in fact it is not riskier having the baby 3 weeks after or 3 weeks before: which actually makes sense if we see the window as being 6 weeks. But of course the issues are much more complex than this! Who says that the length of pregnancy in itself is the factor which increase the risk of still birth? “Prolonged pregnancy may have causes that correlate with causes of the factors under study or prolonged pregnancy may be a response to already existing fetal disease” (Olesen et al 2003) ”

One study Menticoglou and Hall (2002) concluded that there were no statistical differences between the outcomes of babies in the induction group and the waiting group.

The NICE guidelines in the UK state a prolonged pregnancy is after 42 weeks, so we can question why women are being offered induction before that date. 5-10 percent of women are still likely to be pregnant at 42 weeks.

I think we do well to heed the words of American Professor of Obstetrics and Gynecology J Christopher Glantz (2012:286-7) as quoted by Sara in her introduction

“obstetrics has become ever more inclined toward increased intervention in recent decades” despite the fact that “no ascribable improvement has occured in overall neonatal mortality, which has gradually declined since 1990 irrespective of whether the cesarean section rate rose or fell”

” “Routine care during pregnancy and birth interferes in the lives of healthy people… it is difficult to imagine the extent to which our efforts might, for example, distrurb the development of a confident nurturing relationship between the mother and baby. The harmful effects we measure in randomised controlled trials are limited to those we have predicted may occur. Sometimes after many years unexpected harmful effects surface only because they are relatively common or striking in their presentation…Many unanticipated harmful effects probably never come to light.

For these reasons, interventions in pregnancy and childbirth need to be subjected to special scrutiny. Our guiding principle is to advise no interference in the process of pregnancy and childbirth unless there is compelling evidence that the intervention has worthwhile benefits for the mother and/or her baby – only then is there a good chance that benefits will outweigh both known adverse effects and those which may not have been thought of”